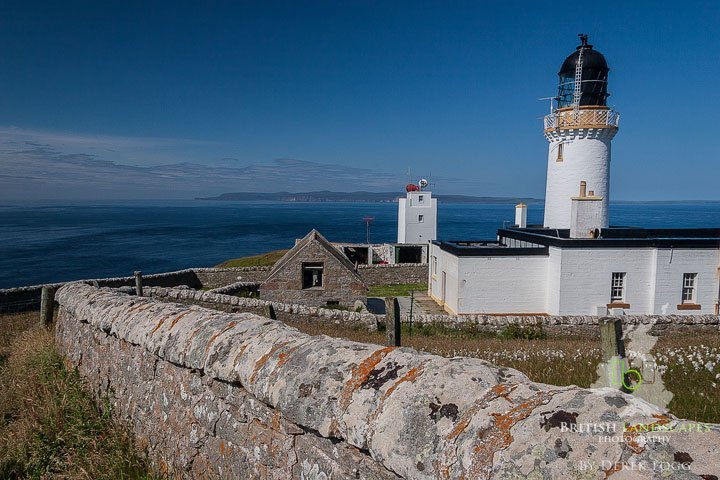 In the past, I have written on a few occasions about lighthouses around the British coast including a number in Scotland. On my travels, I keep coming across them in some stunning locations so I thought it was worth sharing others from around the Scottish coast.

Where better to start than Dunnet Head with Orkney in the background only 6.75 miles away across the Pentland Firth. At 58 degrees north, geographically it is the most northerly point on mainland Britain, 2.35 miles further north than John O Groats. You cant get more outstanding than that.

Although Dunnet Head lighthouse is only 66 feet high, it is perched on a 280-foot sheer cliff face, which places the light almost 350 feet above sea level. The lighthouse was built in 1831 by Robert Stevenson, an esteemed lighthouse designer and grandfather of Kidnapped and Treasure Island author Robert Louis Stevenson. You can imagine how visits to remote lighthouses must have inspired these books! By the time Dunnet Head was built, Robert Stevenson had completed 10 other lighthouse projects around the Scottish coast – all remarkable feats of engineering which have withstood the test of time.

From the most northerly point on mainland Britain to the most north-westerly. Cape Wrath is separated from the rest of the mainland by the Kyle of Durness and consists of 107 square miles of moorland wilderness known as the Parph. The first road across the Parph was built in 1828 by the lighthouse commission. This road connects a passenger ferry that crosses the Kyle of Durness with the buildings on the peninsula.

Much of the cape is owned by the Ministry of Defence and is used as a military training area, including as a live firing range.

I have attempted to visit Cape Wrath when in the Durness area on a number of occasions over the years including during the Icelandic volcano eruption of 2010. After three attempts I finally managed to actually get across to the lighthouse during my 2016 North Coast 500 photo road trip. Built-in 1828 by – you guessed it – Robert Stevenson it was manned until 1998 when it was converted to automatic operation. The light, which is 400 feet above sea level, is visible for 25 miles.

Next, we visit the Tarbat Peninsula which is famous not only for its beauty and tranquillity but also as it is the most Eastern point of the north of Scotland. At its tip stands the Tarbat Ness lighthouse – the third tallest in Scotland behind North Ronaldsay and Skerryvore. Although built by the Stevenson’s it is notable for having two distinguishing broad red bands

Finally, we are on the west coast, north of Lochinver, at Stoer where the Stoer Head Lighthouse stands in a truly remote location. It’s nestled in one of the furthest most peninsulas of Assynt, with the nearest neighbour in a small scattering of crofts over a mile away.

Dating back to the 1870s and automated in 1978, the lighthouse is currently used as a self-catering holiday rental. You may notice a striking resemblance to the Dunnet Head and Cape Wrath lighthouses and that is because it was designed and built by members of the Stevenson family, brothers David and Thomas Stevenson.

The location is truly breathtaking and is one of Scotland’s best places to spot whales, dolphins and porpoise. Weather permitting, basking sharks can be seen during the warmer summer months.

I must count one day of how many lighthouses I have actually seen on my travels but until next time I hope that you have enjoyed this further look at lighthouses around the British coast.