Shore Leave in the UK 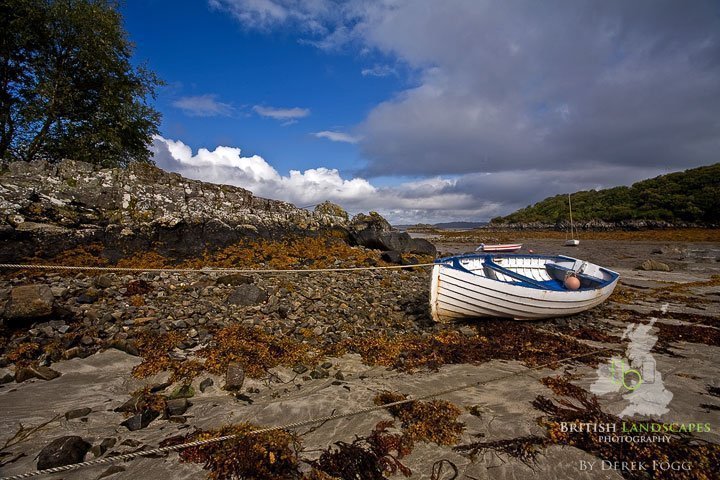 In the past, I have written two articles on Britain’s Wonderful Wrecks that I have come across on my photo trips around the British Isles but I suddenly thought that what I hadn’t done was to complete an article featuring boats which are not wrecks but just pulled up onto the shoreline waiting for the next time they are needed. In other words, they are on “Shore Leave in the UK”

So guess what I have waded through the archives and come up with a number of suitable images.

First up is a shot from an Autumn trip to the Loch Lomond and the Trossachs National Park at Glen Finglas Reservoir which is near Brig O’Turk in the heart of the Trossachs. The history of Glen Finglas and its relationship with people goes back thousands of years. More recently, part of the glen was flooded to create a reservoir. A tunnel links it to nearby Loch Katrine. Both provide drinking water to millions of people who live in the city of Glasgow. When the reservoir was flooded the water covered old hay meadows and farmsteads. The remains of field walls can still be seen during periods of low water level.

Next, we are going to the Isle of Anglesey in North Wales. The small village of Malltraeth lies in the south-west corner of Anglesey, at the head of the long inlet formed by the Cefni Estuary. Malltraeth means salt marsh in Welsh and the whole area is renowned for its birdlife and was once home to the talented wildlife artist Charles.F.Tunnicliffe.

Now back to Scotland in the Outer Hebrides. Eoligarry jetty is located on the Eoligarry peninsular at the northern tip of the Isle of Barra. It was the site of a small ferry terminal where a gentle soul known as Big Neil ran an intermittent passenger ferry service to Ludig on South Uist until a new vehicle ferry went into service operating between Barra and Eriskay.

Back on the Isle of Anglesey in North Wales at Aberffraw which means “Estuary of the River Ffraw” Historically, Aberffraw was once a very important port. Between the 7th and 13th centuries, it was one of the most significant towns in North Wales, home to the Princes of Gwynedd, including Llewelyn the Great. At times it could justifiably claim to be the capital of all Wales. The estuary gradually silted up, leaving the present coastline of sand dunes. The dunes range as high as 30 ft and more. The build-up of dunes has created the inland lake of Llyn Coron, which was formed by a blocked river that had previously drained into a larger Aberffraw Bay.

Lastly, we are back in Scotland at Samalaman Bay a small bay lying to the west of Glenuig and is seen here from the minor road to Smirisary. Samalaman Island guards the entrance and an old stone-built jetty lies at the head. Samalaman Beach is close by and with fine views to the Small Isles it is considered to be one of the best beaches in Scotland. Samalaman Island is accessible at very low tides, by crossing the stretch of water “Saideal Samalaman” It is not clear what the name actually means, but care should be taken to avoid being stranded by the incoming tide.

Unfortunately, that is all for now but hopefully, we will be taking more “shore leave’ before very long.