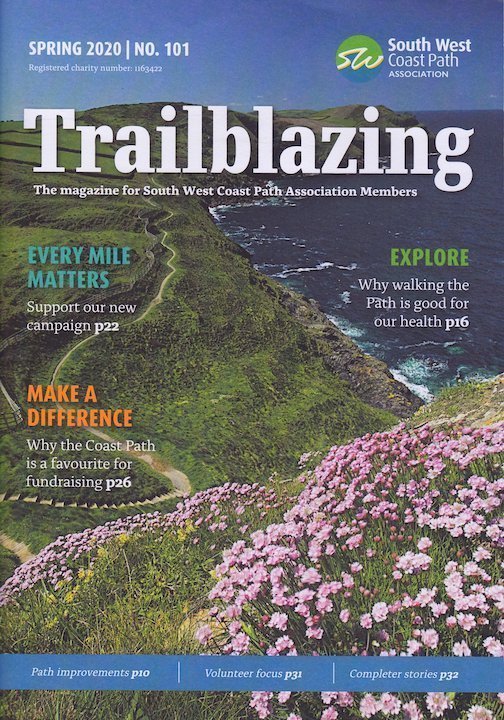 The South West Coast Path Association is a charity that has been looking after the Coast Path for over 45 years.

It was instrumental in establishing the South West Coast Path National Trail in 1978 and have been protecting and improving it ever since.

About this time last year, one of my images was used on a Promotional Banner by the South West Coast Association to promote their work as the charity that protects the Path. It was originally going to be used on the front cover of their magazine “Trailblazing” but instead was used on the banner.

This was the view of the impressive piece of footpath engineering, that attracted them. A steep flight of steps takes you down from the heights of Scarnor Point to an undulating stretch of the South West Coast Path bounded inland by a stout wooden fence which stretches most of the way to Port Quin. The path wiggles its way above Reedy Cliff on the left and Downgate Cove below on the right as it moves out towards Kellan Head in the distance.

It has now being used again this time on the Association’s “Trailblazing” magazine Spring 2020 front cover.

Becky Millington, Communications Officer commented  “It’s just such a fantastic shot for us to help communicate the beauty of this walking trail.” and “It really is a stunning shot, we rarely get to see so much Path in one photo which is why it caught my eye! More views of Cornwall and the South West Coast Path can be found in the Cornwall and Dartmoor gallery where all images are available to buy as paper, acrylic, metal, framed prints and canvases among other items.

This is the first time I have had the opportunity to see a copy of the “Trailblazing” magazine and it is a very enjoyable and informative read for anyone interested in the learning more about the everything that is happening on the South West Coast Path.

Receiving the magazine is just one of the many benefits of joining the Association. To learn more about membership just go to The South West Coast Path Association website.