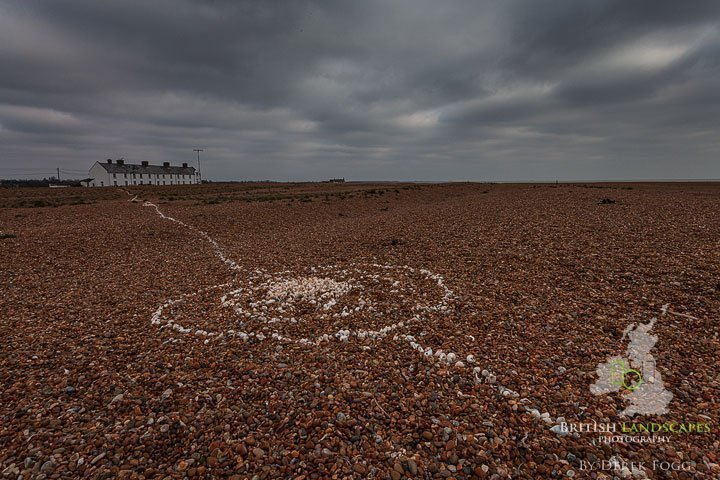 This month, the Suffolk Coast and Heaths Area of Outstanding Natural Beauty (AONB) celebrates 50 years since its designation. It is one of Britain’s finest landscapes extending from the Stour Estuary in the south to the eastern fringe of Ipswich and, in the north, to Kessingland.
It covers 150 square miles, including wetlands, ancient heaths, windswept shingle beaches and historic towns and villages.

The celebrations reminded me to take a look back at my trips to the area which I have visited twice before and on each occasion have found the landscapes quite distinctive but most of my time in the area was on the coast. So with apologies for the lack of content in this article on the other landscapes but I am sure they are just as important and appealing if not more so than the coast. On my first visit, I based myself near Kessingland which is just outside the AONB and this was the view I was presented with as I returned from one of my walks in the late afternoon.

The most memorable part of my first visit was being able to walk along the beach from Kessingland into the AONB and all the way to Southwold and back on a glorious day.

On entering the AONB the first area of interest is Benacre Broad where located on the beach between the sea and a lagoon at the time there was this fascinating marooned skeleton of an old Pine tree sticking up from the sand as a memorial to a lost shoreline. Remains of many dead trees are littering the beach and the causeway that separates the North Sea from Benacre Broad. Most likely they have come from Long Covert or perhaps from Boathouse Covert on the north side of the broad which can just be seen in the background of the image. The trees started their lives growing several hundred yards inland and are now being systematically killed by the salt spray of the ever-encroaching North Sea.

Since my visit, I have heard rumours that this tree no longer exists having been ravaged by the North Sea incoming weather for many years. If anyone knows whether this is correct or not I would appreciate you letting me know in the comments form below.

Beware the tide! Check tide times before you walk as high tide will reach the bottom of the cliffs making the route between Covehithe and Bencare Broads impassable.

Shortly after Benacre, you reach Covehithe Cliffs which are famous for losing land to the sea; it is one of the fastest eroding coastlines in Britain. Every year it loses 15 to 20 feet of the cliff. This process has been going on for centuries.

Moving south along the coast on another day I visited Thorpeness, the picturesque resort village developed as Britain’s first purpose-built holiday resort in the years before the First World War where I particularly wanted to take a look at The House in the Clouds, one of the country’s most famous follies. It was built in 1923 as a water tower disguised as a house to avoid it being an eyesore. The name comes from a children’s poem written by the original owner and inspired by the house.

Next, it was Aldeburgh where Benjamin Britten – one of the 20th century most important composers – spent much of his life. The inspiration he drew from the area is most notable in the famous ‘Four Sea Interludes’ from his opera Peter Grimes. The violinist Yehudi Menuhin once commented, “If wind and water could write music, it would sound like Ben’s.”

In November 2003, a striking tribute to Britten and his music was unveiled on the beach just north of Aldeburgh. Scallop – a 13-foot high steel sculpture was conceived by Suffolk-born artist Maggi Hambling and made by Aldeburgh craftsmen Sam and Dennis Pegg.

The phrase “I hear those voices that will not be drowned” (from Peter Grimes) is pierced through the steel, to be read against the sky. Images of wings rising in flight, swimming fish and the ripple of waves are all suggested by the work, whose scallop forms also recall ancient symbols of pilgrimage, Venus and the sea.

Aldeburgh’s beach is mainly shingle and wide in places where fishing boats are able to be drawn up onto the beach above the high tide. The shingle bank is very steep and has been formed by succeeding high tides and the occasional storm. The Aldeburgh beach fishermen still sell their catch directly to the public from little huts on the front.

Just beyond Aldeburgh is Orford Ness an isolated spit of land, so narrow that in places you can cast a stone from one side to the other. It seems an unlikely place to find the remnants of nearly a century of advanced scientific military research, but that’s exactly what you will discover if you visit Orford Ness.

The Ness is now owned by the National Trust and access is strictly controlled by a ferry from Orford. Unfortunately, I didn’t have time to visit but it looks a very intriguing place and I must return someday.

At the mouth of Orford Ness is Shingle Street a small coastal hamlet situated between Orford and Bawdsey. Desolate, quiet and lacking a street !! There are few places as quiet and remote as Shingle Street. Little more than a clutch of cottages standing on the edge of the Suffolk coast, with only each other and the North Sea for company. Shingle Street was originally a home for fishermen and river pilots for the River Ore.

Walking around the shingle beach looking for photo opportunities I came across a line of shells with occasional pattern breaks that disappeared into the distance. Because of its size and time it would have taken to lay down, it had to have been made by someone from the area or who visited regularly for short breaks. At the time I was intrigued by the herculean efforts of the people who had created this design. I captured images as best I could even though the weather was overcast and dull.

Now almost 8 years on from that day whilst writing this article I have come across the amazing story of two extremely brave ladies who created the shell line. Rather than trying to tell their story myself, it is better that I allow them to tell you in their own words through a short film created by Outhouse Filmworks. I am so pleased that I have at last found the storyline to this subject so I am most grateful to Jeremy Mynott from Outhouse Filmworks for having the inspiration to run with this story. It is also interesting that Jeremy first came across the shell line just two months before I did in March 2012. I do hope that you take the time to take a look at the film where you will also find a short aerial video of the shell line.

So much has changed on this coastline over the last 50 years and whilst, unfortunately, I won’t be around for the majority of the next 50 years to see any further changes, unfortunately, due to coastal erosion, they may be even more extreme than those up to now so certainly worth a visit as soon as you can.

I will end my lookback to the Suffolk Coast in this anniversary year with grateful thanks to all of those involved in the management of the AONB for all their hard work and dedication in protecting and enhancing this outstanding location.

More images of Suffolk can be found in the Norfolk, Suffolk and Essex gallery