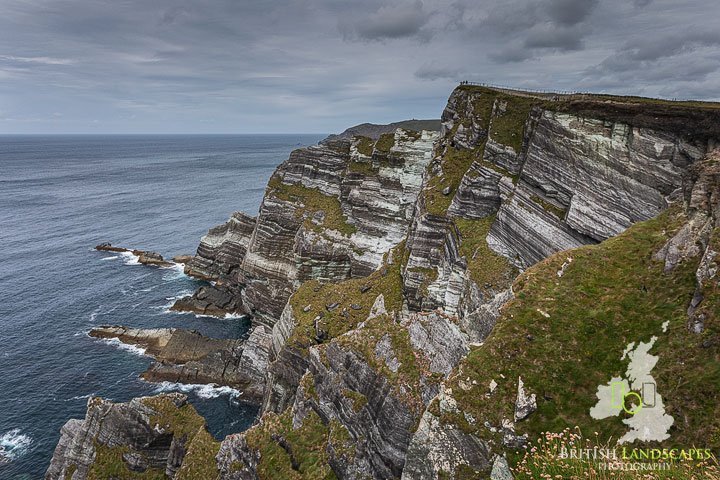 Leaving Galway and Clare behind I started the final leg of the Wild Atlantic Way travelling first through County Kerry and finally County Cork.

Having crossed the Shannon and before arriving at my two night stay on the Ring of Kerry I followed the route passing through five Discovery Points before reaching Fenit Harbour and the view out to sea to Little Samphire Island.

It is home to a very compact light station, enclosed in a high wall around its perimeter. The lighthouse is only 40 ft high and was built in 1854 and remains much the same today as it did back then. In the background is the rocky ridge of the Brandon Mountains.

After my first night at Glenbeigh, I retraced part of yesterdays route as far as Tralee and then followed the north coast of the Dingle Peninsula passing by Tralee and Brandon Bays as far as Brandon Point before driving over the Conor Pass and down into Dingle town.

After a quick break and a brief walk around bustling Dingle on a beautiful day, I managed to bring up to date my Wild Atlantic Way Passport stamps at the Tourist Office before I moved on to follow the Slea Head Drive, one of Ireland’s most scenic roads.

It wasn’t long before I arrived at Slea Head with an incredible view out to Sybil Head – a major location for Star Wars VIII. The famed Three Sisters are to the North in the top right-hand corner of the photo.

With clouds having moved in I managed to capture a rather moody view of the Blasket Islands which are uninhabited. The islands were inhabited until 1953 and at its peak, the islands had 175 residents. The government evacuated the remaining 53 residents to the mainland on 17 November 1953 because of increasingly extreme weather that left the islands cut off from emergency services.

After completing the Slea Head Drive I returned through Dingle and followed the southern coast of the peninsula before arriving back at Glenbeigh for a second night.

The following day it was a trip around the Ring of Kerry. One thing I had started to notice over the last few days was that the number of Discovery Points were reduced compared with the number on the earlier sections. Not that it matters and in many ways, it made it more relaxing not having to be driving down many narrow roads and keep jumping out of the camper van to see what was yet another beach or harbour with no particularly outstanding features that would warrant it being a Discovery Point although local history may well tell a different story.

Anyway enough of my criticism. I passed through Cahersiveen to reach what was the only Signature Discovery Point of the day at Bray Head on Valentia Island. The Island is one of Ireland’s most westerly points and lies off the Iveragh Peninsula. It is linked to the mainland by the Maurice O’Neill Memorial Bridge at Portmagee.

Ideally, I would have liked to have walked up to Bray Head but when I arrived at the carpark the wind was so strong that even opening the camper van door proved difficult let alone walking for 25 minutes up to a more exposed position. Even trying to keep the camera steady was impossible. So in this instance, a quick mobile phone image was the best I could achieve.

Off the Ring of Kerry is a 20-mile drive along Ireland’s coast that is just as beautiful called the Skelling Ring, it is wilder, shows untamed landscapes, and, best of all, there are no coaches to contend with. It’s the best of the Iveragh Peninsula (some might say all of Ireland) and is worth a visit.

Rising majestically from the sea, Skellig Michael towers 714 ft above sea level. On the summit of this awe-inspiring rock, you will find a remarkably well preserved sixth-century monastic settlement. On the spectacular Small Skellig 23,000 pairs of gannet nest on every available ledge making it the second-largest gannet colony in the world. Back using my main camera I managed numerous shots of the islands using my telephoto lens but liked this one with the strip of land breaking up the otherwise large expanse of sea.

Also on the Skellig Ring are the Kerry Cliffs where a remarkable and impressive panorama presents itself, dominated by the huge cliffs over 1,000 feet high. The cliffs were formed in a desert environment over 400 million years ago.

From there it was back through Sneem to Kenmare to follow the route around the Beara Peninsula with yet again limited Discovery Points and deteriorating weather. I made it to the end of the Peninsula and the Signature Discovery point at Dursey Island. The conditions were dark skies, windy and raining but the high point was a fish and chip van which I duly paid a visit to being advised by the lady serving that the fish was freshly caught by her husband that morning. Returning to the protection of my camper van I settled down to the heartwarming meal looking out to Dursey Island. It is one of the few inhabited islands that lie off the southwest coast of Ireland and is separated from the mainland by a narrow stretch of water called the Dursey Sound which has a very strong tidal race, with a reef of rocks in the centre of the channel which is submerged at high tides. This peaceful island, with only a handful of semi-permanent residents, is connected to the mainland by Ireland’s only cable car which even in those weather conditions people were being brave enough to make the crossing. Rather them than me.

It was then back along the Beara Peninsula southern coast to my next overnight stop for two nights at the head of Bantry Bay.

The plan the next day was to drive to Sheep’s Head and Mizen Head. The weather conditions were not favourable and heading down towards Sheep’s Head they gradually worsen to the extent that at times I couldn’t see very far in front of myself. It was a long drive out to see nothing but at least I made it there.

Driving back along the Sheep’s Head Peninsula the saving grace of the day was a view that I would not have seen if it wasn’t for the weather conditions of storm weathered trees silhouetted against the grey sky. In the pouring rain and partly blocking the road which because of the weather conditions thankfully was reasonably quiet, I managed to capture that view.

The view at Mizen Head, the next Signature Discovery Point was no better so all told a miserable day and the worst of the whole trip except of course for the image above. Nothing better to do than to return to my overnight stop and hope that my last day on the Wild Atlantic Way would be better.

The following morning whilst still grey and overcast it was at least not raining. For me, I found the landscape photography opportunities on this last section somewhat disappointing and I have no images that I feel are worthy of sharing. On the bright side, the weather improved so that upon arriving at Old Kinsale Head, the end of the Wild Atlantic Way and the final Signature Discovery Point I had blue skies and sunshine. The downside was that there was no access to the headland.

Most of the extreme headland is home to the famous Old Head Golf Club and the 17th century Old Head of Kinsale Lighthouse. Usually, access to the headland is restricted to members and golfers from the golf club and the lighthouse to is mostly not open to the public except for a couple of days per year in May and during Heritage Week in August, when locals and tourists are given access by bus to the lighthouse.

Another disappointment and the best I can offer is a distant view with a mobile phone from the nearby car park. The inclusion of the STOP sign is deliberate as this whole access issue has been the subject of a long-running campaign “Free the Old Head of Kinsale” and even a Supreme Court Ruling.

So has I end my journey along the Wild Atlantic Way I now have to drive to an overnight stay south of Dublin before catching the ferry home the next day. Arriving home I had completed just over 3000 miles in 16 days – my longest photo trip and now on my photographic journey around the British Isles, I have visited and photographed all five countries – England, Northern Ireland, Republic of Ireland, Scotland and Wales.