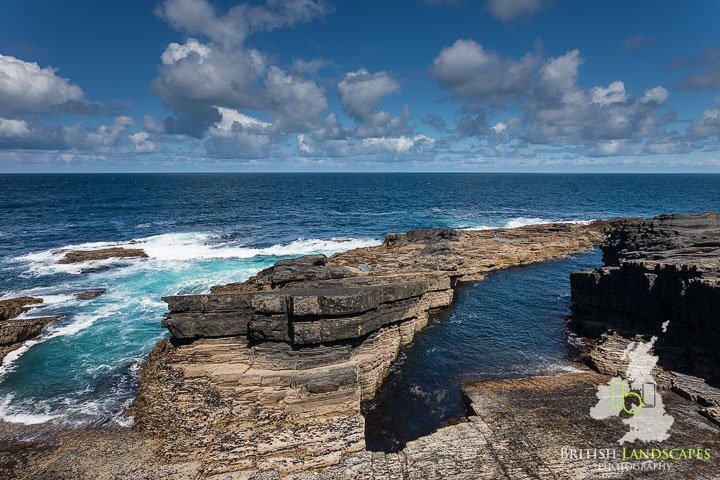 Following my journey through Sligo and Mayo, my stay on the Galway coast near Clifden was for two nights with wonderful views across a small beach to the sea. With more time it meant I could bypass locations from the previous day. It was a beautiful morning so before doing that I drove down the coast to take in the view over to Omey Island. It is a tidal island situated near Claddaghduff on the western edge of Connemara. From the mainland, the island is inconspicuous and almost hidden. It is possible to drive or walk across a large sandy strand to the island by following the arrowed signs. I don’t recall seeing anything quite like that on travels.

Then it was time to drive The Sky Road one of the most picturesque areas in the Connemara region. The circular route is 10 miles long and takes you out west onto the Kingstown peninsula. Simply put, the scenery along the Sky Road is stunning. Very few places in Ireland can match the rugged beauty and range of scenery that can be seen from the Sky Road. The road separates into the lower and upper roads. The lower road goes downhill towards the sea and will give you a very close up view of the landscape, but the upper road is most popular because of the views it offers over the entire area. Here you will find unbeatable views of the Connemara countryside, the Atlantic Ocean, The Islands, and the coastline of Co.  Mayo to the North, and Co. Clare to the south. To make the most of it I drove both stretches of road.

It was then time to retrace my route from yesterday. I went back as far as Killary Harbour another Signature Discovery Point where twenty years ago I had spent part of my twenty-fifth wedding anniversary sailing down the fjord.

Killary Harbour is Ireland’s only true fjord and it extends 10 miles from the Atlantic coast deep into its head at the wonderful Aasleagh Falls. It is stunningly beautiful along its full length and forms a dramatic border between counties Galway and Mayo. And here in this remarkable glacial valley are some of the most spectacular vistas in the West of Ireland.

Now it was time to take a brief visit to the Connemara National Park and a loop around The Twelve Bens including that well-known view of the Pines at Derryclare Lough. The majestic Twelve Bens mountain range lies to the north of the lake. Pine Island lies within the lake, about 200 yards offshore.

At the end of the day, I returned for my second night at Claddaghduff on the coast and prepared for the next day travelling through County Clare.

The next Signature Discovery Point was upon me before I really got going the following morning. It was at Derrigimlagh an impressive blanket bog with a stunning mosaic of tiny lakes and peat which I am sure looks more photogenic from above. Maybe that is why Alcock and Brown safely crash-landed here when in 1919, exactly 100 years before my visit they were the first pilots to fly non – stop across the Atlantic. It is also the location of the first permanent transatlantic radio station that transmitted the first transatlantic radio signal in 1907.

Although I might have been risky crossing the peat bog I only wish now that I had got closer to one of the many lakes to include more of them in the photo. Still. there is always another time.

It was from here on in that whilst there were a number of Discovery Points to visit the photographic opportunities were very limited and many in my opinion did not warrant the inclusion. Having passed through Galway City shortly thereafter storm clouds were threatening but I managed a short time exploring the Burren coastline before arriving at my overnight stop at Doolin in the pouring rain.

The following morning I was off early to get to the Cliffs of Moher the next Signature Discovery Point. Whilst I was expecting many visitors I wasn’t expecting a Visitor Centre as well and a charge to visit the Cliffs. Stretching five miles along the Atlantic coast of Clare, the cliffs reach at their highest point 700 foot. I have to say I wasn’t as impressed as I was after my visits to Slieve League in Donegal and the Giant’s Causeway on Northern Ireland’s Antrim Coast.

After my disappointment and having past Donald Trump’s Hotel and Golf course at Doughmore Bay after a few miles I visited what I considered to be the more eye-catching rock formations of Kilkee Cliffs and shortly after the Bridges of Ross both on Loop Head. Loop Head the next Signature Discovery Point is a slim finger of a peninsula pointing out to the sea from the most westerly corner of County Clare, set between the Atlantic Ocean and Shannon Estuary, with breathtaking views.

I crossed the Shannon Estuary by ferry and left County Clare behind and landed in County Kerry for a two-night stay on the Ring of Kerry from where I was planning to tour the Dingle and Beara Peninsula’s as well as the Ring of Kerry.

More photos can be found in the Galway and Clare gallery and please join me next time as I complete my journey along the Wild Atlantic Way in County Kerry and County Cork.