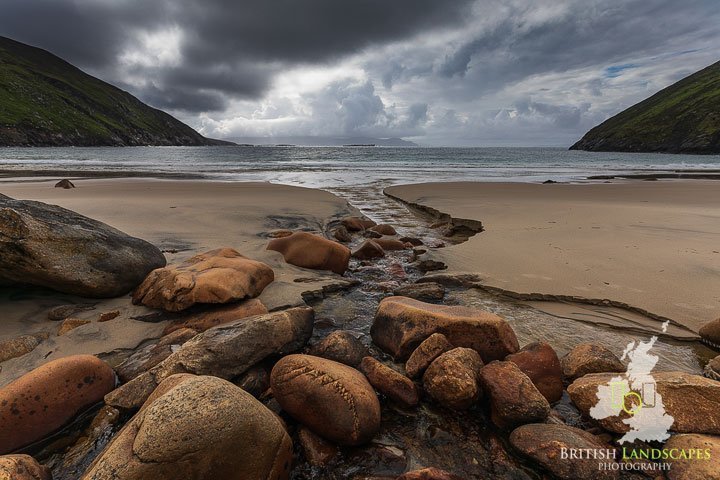 Leaving my exploration of Donegal behind I continued along the Wild Atlantic Way visiting numerous Discovery Points. Eventually, I arrived at the next Signature Discovery Point at Mullaghmore Head in totally contrasting skies from when I left Slieve League earlier in the day but that’s Ireland for you and without the ever-changing weather and light it would not be the fantastic landscape that we are can enjoy so much.

Before too long I was leaving Sligo after what must have been one of the shortest visits and on into Mayo to Ballina and then the next Signature Discovery Point at Downpatrick Head.

Dun Bristle (the Broken Fort) is a 150 ft plus tall sea stack that is just over 200 ft off the north Mayo coast at Downpatrick Head. This is a relatively new sea stack as it was only separated of the mainland Ireland in 1393 when monster seas severed it from County Mayo in an overnight storm. It is very impressive from the surrounding cliffs but I believe it even more impressive from sea level as the waves sweep over the base of the cliffs but only to be tried with careful planning and certainly not this time.

Beyond Downpatrick Head, if you want to visit all Discovery Points has I did the route makes many detours along many narrow twisting roads which were very time consuming making a late arrival at my overnight stay on Achill Island which is connected to the mainland by a ‘swing’ bridge. Very wet and cloudy to finish to the day after such a promising start.

The rain had stopped the next morning but still very cloudy but I was off early for a drive around the island with the main focus being Keem Bay, the next Signature Discovery Point. Keem Bay, at the western end of the island, is considered to be one of the most picturesque bays in Ireland. It is accessible by road over a twisting clifftop route on the side of Croaghaun mountain. Keem Bay is virtually uninhabited (the only building is a former coastguard station) and provides a peaceful and magnificent retreat from the 21st century.

Keem Bay proved to be a very photogenic location and one where I could have spent considerably more time but with such a pressing schedule I had to move on.

For those of you who have been following this series, you will recall that I was intending to visit all Discovery Points using my Wild Atlantic Way Passport which included collecting all the stamps along the way. My original research indicated most of the stamps were available in the local post offices but it soon becomes apparent that using those would not work as some were now closed never to be opened again and others were not always open when I was in the area. This meant that I was unable to collect all the stamps so I changed plans and forget the post offices and decided to just collect them at the main tourist information offices. Because I had missed some already I made the decision to complete a catch up by backtracking to the main post office in Ballina which I had already past through the day before last. Although time-consuming and more use of fuel it was worth it just to get up to date. I won’t make the same mistake again.

Leaving Ballina for the second time I joined back up with the main route passing through Westport intending stopping next at Croagh Patrick View. I was not surprised to see most of the car parks were full and even if there had been space each had an entrance barrier so low that even my camper van couldn’t enter. I can only assume this was to stop people staying overnight but I have to say it is the first time ever that I have not been able to pass under an entrance barrier. Ireland Tourist Board please note.

Plan B was just further down the road at Old Head Beach picturesquely situated on the edge of dense forests where I managed to find what I believe is an acceptable alternative view of the mountain. Croagh Patrick forms part of a U-shaped valley created by a glacier flowing into Clew Bay during the last Ice Age and is part of a longer east-west ridge with Ben Gorm forming the most western peak.

Before the route turned inland there were visits to three further locations including Carrownisky Strand where I managed to capture a view out to sea with the outline of Inishturk highlighted in the distant sunshine whilst substantial cloud formations formed a dark moody frame around it.

After leaving Mayo I was heading into Galway and my next overnight stop on the coast near Clifden. However, before that there was a visit to Silver Strand and then the drive through the magnificent Doolough Valley. It is embedded in a mountainous landscape of unspoilt nature, with two lakes on the east side, where the Wild Atlantic Way winds its way through the valley. A cross can be found on the northern edge of the valley, dedicated to the victims of the “Doolough Tragedy”. During the Great Famine in 1849, hundreds of people made their way from Louisburgh to Delphi Lodge, threatened by starvation, to ask their lord for food. Their suffering was ignored, they were turned away and a lot of them died on the return to Louisburgh in Doolough Valley from malnutrition. “How can men feel honoured by the humiliation of their fellow beings?” This question of Mahatma Gandhi is engraved in the cross.

I was now in Galway and there were some locations I wanted to visit but as always and with my earlier route retrace adding to the days drive time I was keen to get to my overnight stay and have a rest. Rather than rush those locations I would have to complete another route retrace the next day.

There are more photos in the Sligo and Mayo gallery and don’t forget to keep following as I continue along the Wild Atlantic Way through Galway and Clare.