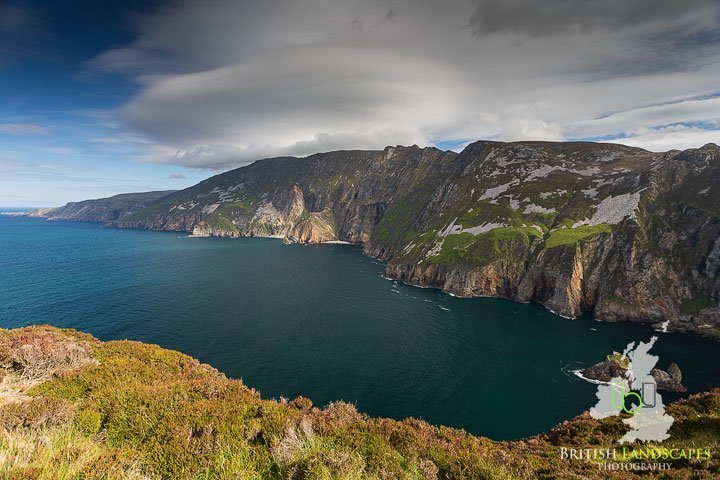 After my first day in Donegal on Day 2 of my photo trip along the Wild Atlantic Way the rain had stopped but it was grey and overcast in the morning. Still, I retraced the last few miles of yesterday to visit Doe Castle and Island Roy Views but the conditions did allow many opportunities for landscape photography.

My next overnight stop is at Narin – Portnoo and whilst there was no Signature Discovery Points today there were many other locations to visit. Before too long I was at Dunfanaghy and driving around Horn Head.

Horn Head (Corrán Binne, meaning “Hollow in the Hills”) forms part of Sheephaven Bay. The Horn Head cliffs rise straight out of the water to a height of about 600 ft on the ocean side of the peninsula. From here you have a 360-degree view over everything that Donegal offers. Look out to sea to Tory Island, in the distance to the right is the most northerly point of Ireland, Malin Head. Turning clockwise, you see the Rosguil Peninsula, beaches, then the mountains, Muckish and Errigal, The New Lake, Tramore, and back round to Tory Island.

On the drive back down from Horn Head, the view across Sheephaven Bay to Dunfanaghy with the cloud-covered summit of Muckish in the background was just amazing. From here at certain points, it is possible to see six different beaches.

With the weather drastically improving the next stop was Bloody Foreland or “Cnoc Fola” (The Hill of Blood) which derives its name from the evening sun which illuminates the rocks along this section of the coast to a rich red hue. In the autumn months, too, a thick covering of fern enflames the hillside with a russet-red-brown colouring.

Bloody Foreland has no background in factual history to warrant the title “bloody”, although folklore records that one particularly unlikable warlord “Balor of the Evil Eye” was eventually slain by his grandson Lugh Lámh Fhada on the slopes of Cnoc Fola. Indeed, some say that the tide of blood which flowed from Balor’s evil eye stained the hillside and gave it its name.

Having visited the airport at Barra in the Outer Hebrides where the planes land on the beach I thought that there would be no better location for arriving by plane to your destination but the beach next to Donegal Airport must run a very close second.

Carrickfinn is situated in Gweedore Bay; it’s an extensive sandy beach with a good dune system. There are extensive machair grasslands and the area is noted for the presence of rare plant species. This sweeping stretch of sand with a backdrop of distant mountains remains wonderfully undeveloped, despite being right alongside and parallel to the airport.

I arrived at my Narin – Portnoo overnight stay late afternoon. I even managed to get make last orders in the on-site cafe and boy did I make the right decision ordering Surf and Turf which was the most tasteful I have ever had. Excellent.

Having arrived early and eaten I had a short while to relax before walking straight from the camper van onto the adjacent beach hoping for a west coast sunset and I wasn’t let down.

Tramore Strand Blue Flag beach is a sandy beach set in a cove with welcome protection from Dunmore Head. The beach is backed by an extensive sand dune system and the coastal area here is a designated a Natural Heritage Area exhibiting a highly diverse range of both coastal and terrestrial habitats.

Off early the following morning for my final day in Donegal arriving at Sliabh Liag, sometimes Slieve League or Slieve Liag, a mountain on the Atlantic coast. At almost 2000 ft, it has some of the highest sea cliffs on the island of Ireland. Although less famous than the Cliffs of Moher in County Clare, Slieve League’s cliffs reach almost three times higher.

On arrival, I was surprised to find a rather large car park with full facilities which thankfully was almost empty. I noticed that the road up to the cliffs had a barrier on so I assumed that you had to walk from there and set off. Some sections were quite steep so has I slowly walked further up cars and then a small coach passed me by which I thought was strange. Arriving at the top I was surprised to find that that there was a small car park so I could have driven up. Not worry I am sure it was better for me than driving.

So that was stage one of my Wild Atlantic Way photo trip has I say goodbye to Donegal. Two and a bit days is far too little to do this area justice and there are many places I would like to revisit at a more leisurely pace. It was a rather tiring leg on many narrow twisting roads which added another 800 or so miles from my home start. More photos can be seen in the County Donegal gallery

Join me next time as I cross over into County Sligo and Mayo.