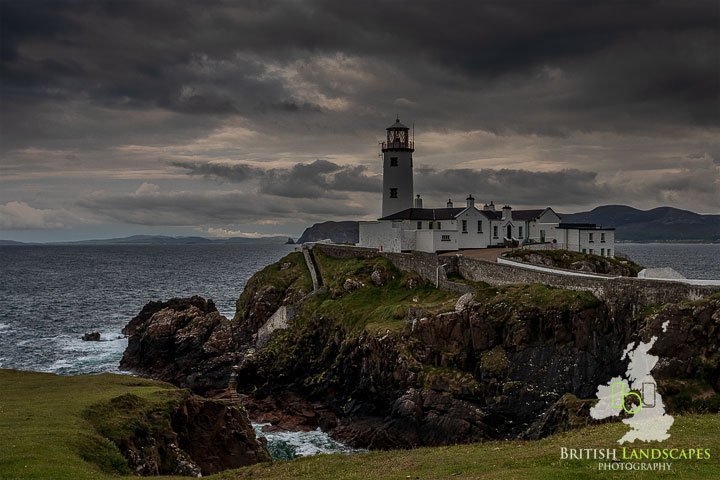 After my landscape photography trip through Northern Ireland from the Magical Mourne’s to driving the Causeway Route including the Giant’s Causeway I had already completed almost 550 miles since leaving home and now I am about to start the 1600 mile Wild Atlantic Way and I can’t wait. I have been intending to complete this trip for two or three years since I completed Scotland’s North Coast 500 in 2016 but something always seem to get in the way but at last I have finally made it.

This is one of the longest defined coastal route in the world. It winds its way all along the Irish west coast from the Inishowen Peninsula in the north down to the picturesque town of Kinsale, County Cork, in the south.

Leaving Bushmills I travelled through Londonderry/Derry and picked up the start of the route at Muff where I had planned to buy my Wild Atlantic Way Passport which at ten euros is an absolute bargain. The passport serves as proof that you have travelled the 1600 mile length of coast by collecting 188 unique stamps, one for each of the Discovery Points along the route. 15 of these Discovery Points have been identified as being “Signature Discovery Points” – in other words, iconic must-see sights along Ireland’s west coast and have been called the “15 Wonders of the Wild Atlantic Way”.

Following the route from Muff and calling at discovery points on the way I eventually arrived at Malin Head the first Signature Discovery Point.

As far north as you can go…

Malin Head located on the Inishowen Peninsula is the most northerly point of the island of Ireland. Malin Head encompasses an area north of the Black Mountain, there is no specific point which details the location of Malin Head and the area is peppered with many local place names of Norse and Irish origin. There is a weather station on the head, which is one of 22 such stations whose reports are broadcast as part of the BBC Shipping Forecast. A tower built in 1805 is situated on Altnadarrow also known locally as the Tower Hill. It is sometimes referred to as Banba’s Crown, however this name was added by the then Bord Failte in 1971 and has no local historical significance.

Continuing through Pollan Bay and the Gap of Mamore I ended up in the middle of a cycle race and with each cyclist being protected by a following vehicle it made for slow progress for a number of miles. I have to say that I have great admiration for the cyclists because some of the hills were extremely challenging to say the least.

Dunree Head is accessible by road over a twisting clifftop route along the side of Urris Hills. This location marks the site of Fort Dunree and Military Museum. Given the expansive coastal views Fort Dunree played a vital role protecting the entrance into the deep waters of Lough Swilly. Lough Swilly is a gloriously desolate and scenic sea lough, some 30 miles long, that separates the Inishowen Peninsula from the rest of Donegal.

Having now left the cycle race behind I pressed on passing through Buncrana and eventually arriving at Letterkenny just in time for the Friday evening rush hour which slowed my progress further. During the course of the day the weather was changing and becoming more cloudy with threats of rain but there were a few more miles go and locations to visit before I reached my overnight stop at Creeslough.

Fanad Head was the next major location to photograph. Standing between idyllic Lough Swilly and sandy Mulroy Bay, Fanad Head Lighthouse has been voted one of the most beautiful lighthouses in the world. With its location on the eastern shore of windswept Fanad Peninsula simply exquisite, it’s little wonder that this lighthouse is a Wild Atlantic Way highlight.

With rain starting, light fading and no opportunity for capturing landscapes for the rest of the day I missed out some Discovery Points and drove onto Creeslough arriving at about 8:30 pm with the rain still continuing to fall. So ends my first day on the Wild Atlantic Way and it’s been a tiring day with many twisting and turning narrow roads, delays due to cycle races and rush hour traffic but very much looking forward to the next day when weather permitting I will return back on the route to pick up the places I had missed.

By the way the Irish word Creeslough means “The Belt of Lakes” – a reference to the many lakes that surround this charming village.

Join me for day 2 of the Wild Atlantic Way through Donegal and it’s Northern Headlands.