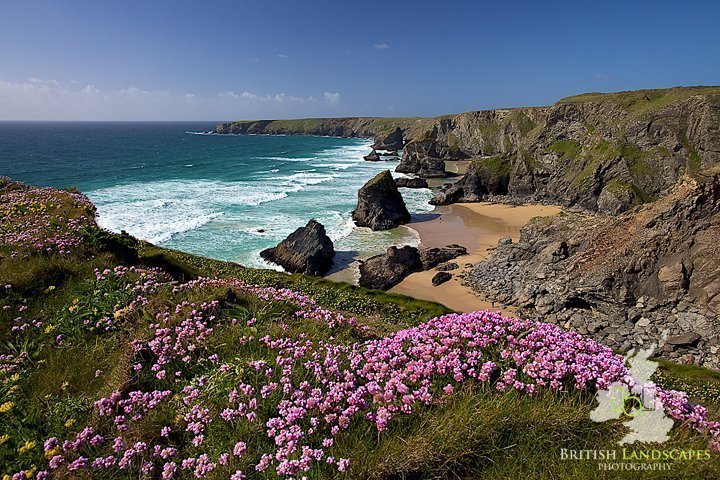 The Cornwall Area of Outstanding Natural Beauty is celebrating its Diamond Anniversary.  It’s 60 years since the twelve sections that make up the Cornwall AONB were first designated in 1959.

The AONB contains some of the most stunning landscapes in Cornwall and is one of the most beautiful parts of the UK.  The AONB holds a diverse range of landscapes from the rugged uplands of Bodmin Moor and West Penwith to the tranquil estuaries of the Fal, Helford and the Fowey.  It is only a short hop from here to the stunning North Cornwall Coast with its dramatic coastal scenery and a great collection of beaches.

I have been fortunate at different times in my life to have visited and walked some of the twelve sections and also photographed certain sections particularly on the north coast and Bodmin Moor and I would like to share a few of my favourite locations with you.

Bedruthan Steps is a truly spectacular landscape on the north Cornish coastline, a few miles east of Newquay.  The cliffs at Bedruthan have been systematically eroded over the years, leaving a series of impressive volcanic rock stacks.  These pillars of detached cliff rise majestically from Bedruthan Beach, forming a series of columns that stretch across the bay from Pendarves Island to Diggory’s Island.  This image was featured for the month of June in the 2018 National Trails calendar.

Next by way of total contrast, I am on Bodmin Moor.  Rough Tor is a hill and tor with its summit at 1313 ft above mean sea level, making it the second-highest point in Cornwall.  It lies approximately three miles southeast of Camelford and one mile northwest of Brown Willy, Cornwall’s highest point.

I can’t highlight the Bodmin Moor section of the AONB without showing you Golitha Falls, a famous beauty spot on the southern edge of the Moor.  An area of woodland occupying a steep-sided valley gorge, with the River Fowey flowing through it in a series of spectacular cascades.

On the coast, I once came across one of the most amazing views of the South West Coast Path so much so that the charity that supports the Path this year used it on one of their promotional banners.  An impressive piece of footpath engineering takes the Path down from the heights of Scarnor Point to Reedy Cliff with Downgate Cove hidden below and Kellan Head in the distance.

To round off our brief visit to the Cornwall AONB in their 60th celebratory year I have time for just two more locations starting with Mousehole Harbour.  A picturesque fishing village on the south coast of Cornwall between Penzance and Land’s End.  Dylan Thomas described the village as the loveliest in England, but there are many Cornishman who would dispute that this part of the world can be classed as England!

Just along the coast is the iconic St Michael’s Mount a tidal island 400 yd off the Mount’s Bay coast.  It is united with the town of Marazion by a man-made causeway of granite setts, passable between mid-tide and low water. Originally the site of a Benedictine Chapel, the spectacular castle on the rock dates from the 14th Century.