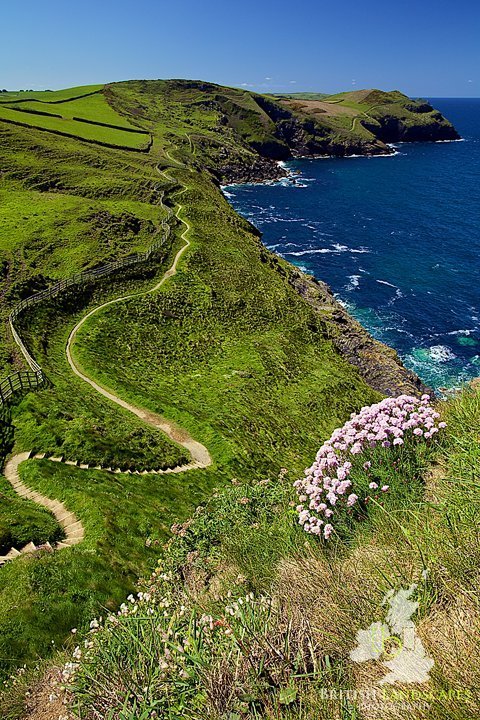 Earlier in the year I was approached by the South West Coast Path Association to see if I was prepared to let them use one of my photos to promote their work as the charity that protects the Path. They had seen my “Rollercoaster” – Reedy Cliff  photo on the #AroundtheUKin365Photos project which I have been sharing everyday on my British Landscapes Photography Facebook Page and Twitter.  Sometime ago I was also approached about using the same photo on the front cover of Countryfile magazine but unfortunately that did not come to fruition mainly due to the cover lines ruining the shot.

Becky Millington, Communications Officer commented  “It’s just such a fantastic shot for us to help communicate the beauty of this walking trail.” and “It really is a stunning shot, we rarely get to see so much Path in one photo which is why it caught my eye!”

Below is the photo which shows an impressive piece of footpath engineering which takes the South West Coast Path down from the heights of Scarnor Point to Reedy Cliff with Downgate Cove hidden below and Kellan Head in the distance.

Of course you can purchase your own copy by clicking on the photo to gain access to the print shop.

The Association did originally intend using the photo on the front cover of their magazine but decided instead to use it on a physical pull up banner, the final design of which can be seen below.

The banner has been put up in the Cotswold Outdoor store in Plymouth to help recruit new members to support the charity. Good luck to Becky and the Association in increasing their membership and anyone can join by going to the South West Coast Path website.  Unfortunately I don’t have any photos of the banner in use so if anyone happens to see it either in Plymouth or anywhere around the South West Coast Path then I would appreciate a photo if you could share one. Many thanks.