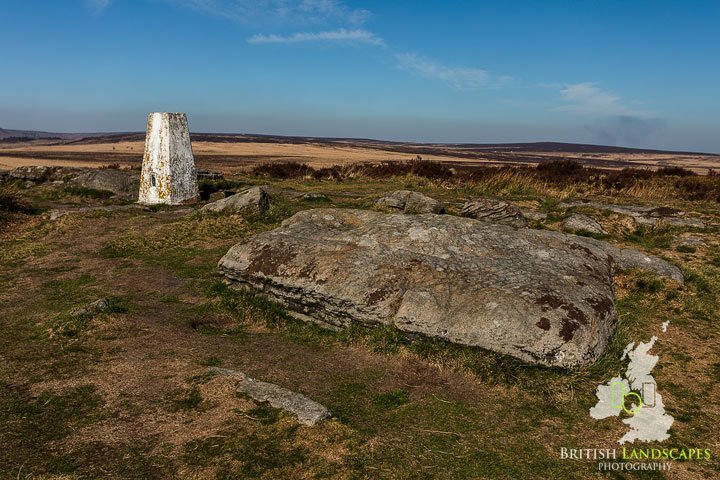 This is the third of the monthly series of one of my 2019 landscape photography projects in my local national park, the Peak District.  If you want to catch up on the first two visits just follow “Peaks of Perfection – Chrome and Parkhouse Hills” and “Cheshire’s Highest Peak – Shining Tor”

This time I visited Curbar and Froggatt Edges on the Eastern Moors.  The Eastern Edges are the southern part of the Peak District National Park’s iconic dark peak landscape.

The walk started at the Curbar Gap National Trust car park from where I headed east crossing Sandyford Brook. Then up the steep bank where a well-trodden path leads north along White Edge with its far-reaching views, especially from the white concrete pillar of the trig point at almost 1200 feet, the highest point of the walk.  White Edge, which borders Big Moor, has panorama views in every direction. The trig point provides a great place to spot red deer across the expanse of Big Moor.

White Edge separates Big Moor in the east and White Edge Moor in the west.  Continuing along the rocky moorland edge for some distance eventually links to a descending path through fields, down to the road close to the Grouse Inn.  On this occasion, being only half way through the walk I decided not to take advantage of their hospitality but moved on across the fields and woodland to avoid having to walk down the busy road.

After a short walk though the The Haywood I crossed the road again and entered a path that leads to Froggatt Edge.  As the woodland opens out, with views across to the limestone of the White Peak, there is a small stone circle known as Froggatt Edge or Stoke Flat Circle.  It consists of eleven typical small Derbyshire stones no more than two feet tall except one which is just over three feet. The stones seem to form a double ring and the structure measures about 50 feet in diameter.

The path continues to meander steadily through ancient woodland with views towards open moorland on the left and the upper reaches of the Derwent Valley to the right eventually reaching the dramatic escarpment of Froggatt Edge.  I noticed the initials R W M N 1867 inscribed into one of the rocks which I thought would make a suitable focal point for a view of the start of the rocky outcrops.  Needless to say I just had to try to find who or what they referred to.  After some searching without any proof I think that they maybe belong to Robert William Mills Nesfield who for a third of a century was Master of the High Peak Harriers and a land agent to the Duke of Rutland’s Derbyshire Estates for almost half a century.  I am guessing that the stone was a marker defining part of the estate’s boundary but.  If anyone knows any further information please let me know.

Froggatt Edge is contiguous with its neighbour, Curbar Edge, so it’s almost impossible to see where one starts and the other finishes.  The path continues along the full length of the Edges and there are many opportunities to take a break to watch the rock climbers attempting one of over 200 named rock climbs here. The gritstone edges were once extensively quarried for their rough, coarse stone.  Remnants of discarded round millstones are found around the edges, giving the stone its common name, millstone grit. Many corn and textile mills were sited here.

Has I head back along Curbar Edge towards the end of the walk there are many interesting subjects that could be included in compositions including many wind sculpted boulders, depressions for water pools and good vantage points to photograph the cliff like the one below with an open southward view with Baslow Edge beyond.

Beyond this view it is a short walk back to the Curbar Gap car park and the end of this month’s trip although it was very tempting to continue to Baslow Edge.  I decided to save this for another day.

I hope you have enjoyed this latest visit into the Peak District National Park and further photos from this trip and others are in the “Peak District” gallery.

I look forward to your company for the next trip.