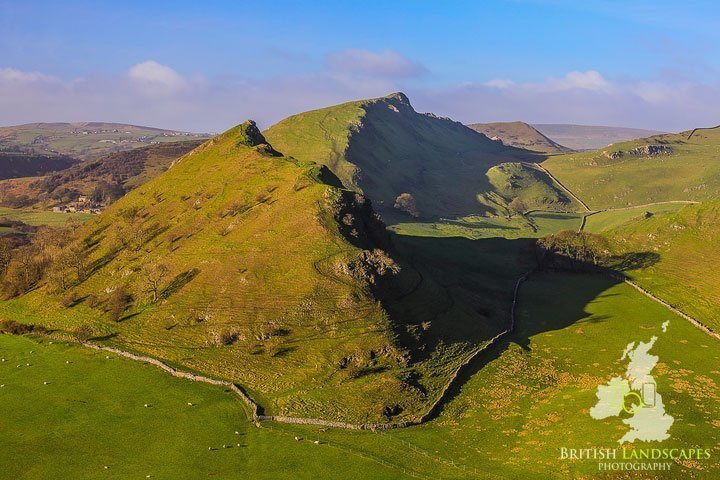 Those of you who have read my Looking Back on 2018, Looking Forward to 2019 post will know that within my plans for 2019 I intended to have one photo day trip a month to a different location within the Peak District National Park.  Well I am pleased to say that I have made a good start with a photo trip early in January.

I chose the area around Parkhouse Hill and Chrome Hill as the location for the visit.  They are amongst some of the most distinct and recognisable hills in the Upper Dove Valley of the Peak District, located just north of the River Dove which forms the Staffordshire/Derbyshire border. Commonly known as the ‘Dragon’s Back’, they are often cited as the only true peaks in the Peak District; a line of pinnacles said to resemble the ‘plates’ along the spine of a stegosaurus dinosaur.

Parkhouse and Chrome Hills are the remains of reef knolls from when a tropical sea covered the Peak District some 340 million years ago.  Parkhouse Hill is the more distinctive of the two rising to over 1000 ft with a fair bit of exposure on the ridge path to the summit.  Chrome Hill is the higher of the two hills rising to 1394 ft and the ridge to the summit is wider.  This ancient feeling in the Limestone dales and sharp ridges combines to provide stunning views and a real sense of geological wonder.

I started my walk in the village of Earl Sterndale and headed straight to the summit of Hitter Hill.  I followed the ridge line until I was overlooking Glutton Grange from where an outstanding view of Parkhouse; in the foreground and Chrome Hill can be seen.

Unfortunately it was difficult to stay too long to make the most of this magnificent view.   The temperature was 4°C and with the added wind chill from its exposed position it felt well below zero.  Still I can’t complain as I don’t think I could have picked a better day to make the most of the view.  From this exposed position I descended back down into East Sterndale and followed the contours around the base of Hitter Hill down to the road at Glutton Grange.  My initial intention was to climb up and over Parkhouse Hill before attempting Chrome Hill. However I decided to skirt round the right hand side of Parkhouse disappearing into the shadows as can be seen above.  On reaching the far side of Parkhouse I climbed part way back up to get the view below of Chrome in all its glory and even managed to find a sunlit spot for a quick sandwich and drink.

Suitably refreshed and slightly warmer I descended Parkhouse to start the climb up Chrome Hill following the slopes upward as seen above.  A few rest stops later I reached the summit of Chrome Hill which is the rock poking up in the top right of the image.  Although fairly exposed I was pleased to find that the wind chill seemed to be somewhat less than earlier although it may well have been that I was just warmer from the efforts of the climb.  The views from the summit are just amazing however due to the position of the sunlight I have no suitable images to share with you. Maybe you should make that your excuse to follow in my footsteps.

Rather than descend the same way I followed a somewhat slippery badly defined path down the far side and round to Stop Farm picking up the narrow road through Dowel Dale, a lovely valley passing Dowall Hall.   I was back where I started the ascent just in time to capture the last sun rays illuminating one side of  Parkhouse Hill from the lower slopes of Chrome Hill.

Then it was a walk back along the roads to East Sterndale and if you are luckier than I was a quick pint or coffee in the “Quiet Woman” pub.  It was closed when I arrived there.  One word of of advice – walking up the B road from Glutton Grange to East Sterndale I would give a miss and take the footpath across and round the base of Hitter Hill.  The section through Glutton Dale is quite narrow in parts and despite walking on the correct side of the road one driver didn’t seem too keen to give me any clearance space.  This probably gave me the closest experience I have ever had with a passing vehicle.  I’m giving them the benefit of the doubt that the setting sun was in their eyes and may have momentarily blinded them, if you consider that an acceptable excuse.

So one Peak District trip down only at least another eleven to go.  Any suggestions for future visits please don’t hesitate to Contact me.