Dorset – From Castle to Coast 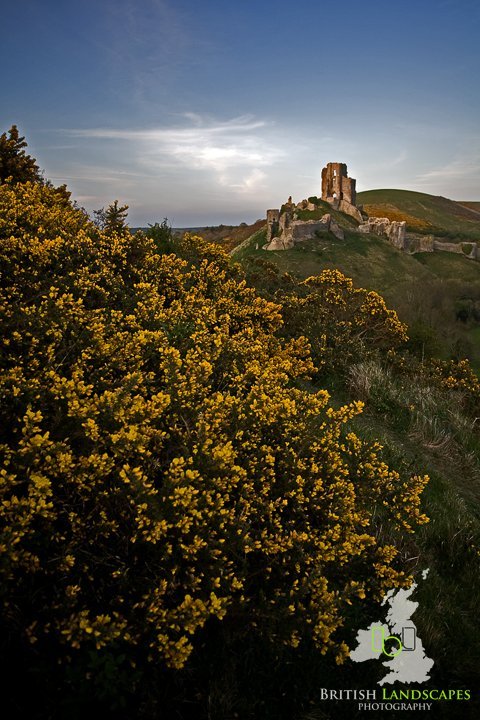 Dorset has a varied landscape featuring broad elevated chalk downs, steep limestone ridges and low-lying clay valleys.  Over half the county is designated as an Area of Outstanding Natural Beauty and three-quarters of its coastline is a World Heritage Site that features notable landforms such as Lulworth Cove, the Isle of Portland, Chesil Beach and Durdle Door.  In this visit, we are going to concentrate on the area known as the Isle of Purbeck which incidentally is not an island but a peninsula.  Starting off at Corfe Castle, a fortification standing above the village of the same name.  Built by William the Conqueror, the castle dates back to the 11th century and commands a gap in the Purbeck Hills on the route between Wareham and Swanage.  The first phase was one of the earliest castles in England to be built using stone when the majority were built with earth and timber.

Although my last visit to Dorset was many years ago I can still vividly recall the magnificent scenery along England’s first natural World Heritage Site – it is known as The Jurassic Coast.  It covers 95 miles of truly stunning coastline from East Devon to Dorset, with rocks recording 185 million years of the Earth’s history.  World Heritage status was achieved because of the site’s unique insight into the Earth Sciences as it clearly depicts a geological ‘walk through time’ spanning the Triassic, Jurassic and Cretaceous periods.  One of the main attractions is Durdle Door, a natural limestone arch which is privately owned by the Welds, a family who owns 12,000 acres in Dorset in the name of the Lulworth Estate although it is open to the public.  The name Durdle is derived from the Old English ‘thirl’ meaning bore or drill.

The South West Coast Path follows the whole of this coast and one of the many locations I photographed was Dancing Ledge, a quarry site.  Dancing Ledge is so called because the stone cut out of it is the same size as a ballroom dance floor and at certain stages of the tide when the waves wash over the horizontal surface, the surface undulations cause the water to bob about making the ledge appear to dance.  The stone removed was transported by ship direct from Dancing Ledge, round the south coast to Kent in order to construct Ramsgate harbour.  The location was also used in a sword fight when “The Man in the Iron Mask” was filmed there.  Having climbed down to the Ledge to capture this image whilst trying to avoid the waves I can see why it was seen as a suitably dramatic location.

Further along the coast is St Aldhelms Head.  The headland is an outcrop of Portland Stone and is the most southerly part of the Purbeck peninsula which has been heavily quarried – a defunct sea cliff quarry exists underneath the coast guard station and a still working quarry, called “St Aldhelms Quarry”.  An un-quarried limestone pillar has been left on the cliff edge, by the 19th-century quarrymen, presumably as a curiosity.  The “Pond Freestone” which makes up the stem of the monolith was the main stone worked at the site.

So from one of the first castles in England built in stone to the very quarries that the stone may have come from you’ve seen it all and if you are visiting other regions of England you will find that many of the most famous cathedrals are adorned with Purbeck marble, and much of London was rebuilt in Portland and Purbeck stone after the Great Fire of London.