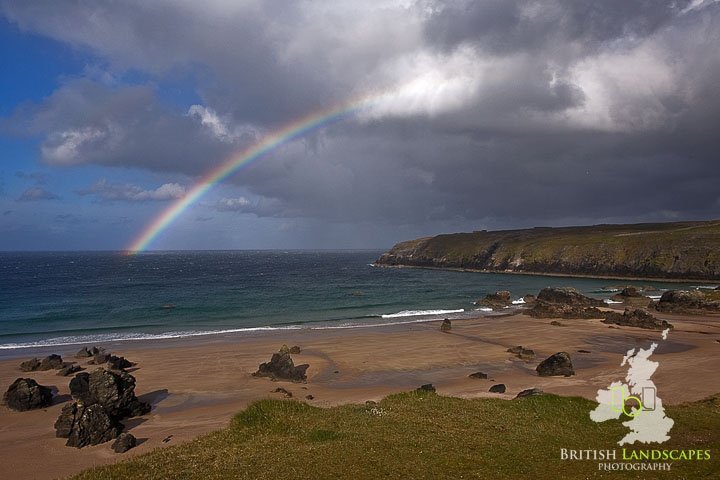 Unfortunately, we always have to endure at least some part of a storm before we have the opportunity to see these beautiful multicoloured arcs of light in the sky.  Rainbows occur when it’s both raining and the sun is shining simultaneously.  To see a rainbow, you must stand with your back to the sun, otherwise, it will not be visible.  I won’t bore you with all the meteorological facts and fiction about rainbows but just share with you a few I have been fortunate enough to capture on my photo road trips.  We’ll start on the north coast of Scotland at Sango Bay.  On this occasion, I had secured a pitch for my camper van right on the cliff edge above the bay.  It was late afternoon just after my arrival and the weather had been particularly stormy for the last few days.  Typical of Scotland another brief storm came through and then cleared leaving the view seen below.

The storm continued into the night with the wind frightenedly blowing in the direction of the cliff edge.  It was also the time of the disruptive Icelandic volcano eruption so the thought of being covered in ash as well made me make a quick exit south.
Still in Scotland but now on the magical Isle of Mull and another occasion when I felt the effect of storms.  I was camping at Craignure on what I thought was the more sheltered side of the island.  I can’t recall whether the photo below was captured before the night of the gales or the day after either way the gales produced Force 9 winds and another disturbed night although fortunately, I wasn’t on a cliff edge this time.  The rainbow appeared again late afternoon on my way back from the Isle of Iona and positioned itself perfectly over the road.  I couldn’t miss the opportunity so I braked quickly partly blocking the single track road but I just had to capture this moment.  I have never seen one since so perfectly positioned – at least not in such a scenic location when I had my camera with me.

Onto England now and the Suffolk coastline.  I was returning from a walk down the coast when the rainbow appeared over the sea. Kessingland has been an area of intense interest to archaeologists as Palaeolithic and Neolithic tools and implements have been found here and the remains of an ancient forest lie buried on the seabed off Kessingland. The forest is not be seen in this photo so we will just have to be happy with the dunes and the rainbow.

The final photo is from North Wales an area that I have visited probably more frequently than any other on my photographic journey.  Returning along the coast a short distance inland above the town of Colwyn Bay there is an amazing view of the distant Clwydian Hills, part of the Area of Outstanding Natural Beauty, and it was here that this rainbow appeared.  This time we only see a small part of the rainbow the rest being hidden behind the clouds but it allows the shafts of light that helped create the rainbow to be more clearly seen.

I know I have many more and possibly more eye-catching rainbow shots so maybe I’ll share some more in the not too distant future. I’m afraid that concludes this meteorological episode.  Maybe next time we’ll take another look at the fascinating world of weather in the landscape. Hopefully, you agree.