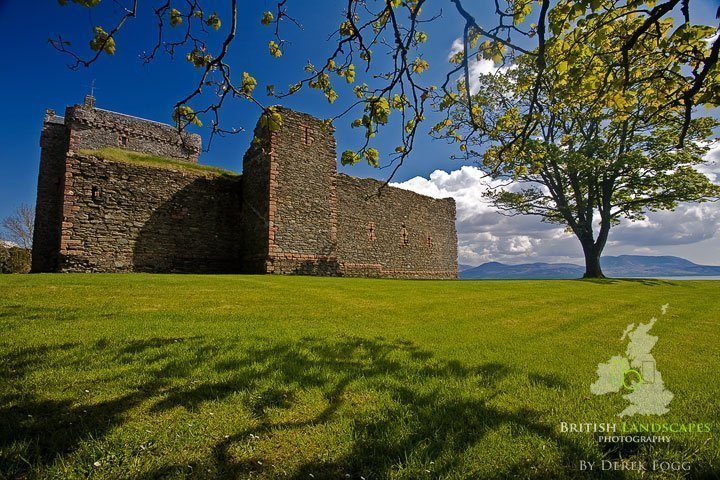 Britain’s turbulent civil history has left it with a magnificent legacy of castles, built to intimidate and designed for defence, many now in ruin yet they continue to hold their auras of power and mystery.  These imposing structures still dominate many areas of the British landscape.  Some are large, famous and easy to find, while others are almost forgotten ruins.  On my photo trips capturing castle images as not been a priority, however, there has been a number of occasions where I have come across castles that appear to be such an integral part of the landscape that I felt compelled to record my visit to the location.  Many of the castles are well known but others are less so but they all help to create a fine landscape view. We start off in Scotland on the Kintyre peninsula.

Skipness Castle stands on the east side of the Kintyre peninsula with wonderful views over to the Isle of Arran, seen in the background.  The first construction was in the early 1200s by the MacSweens, with many later additions and fortifications in the 13th, 14th and 16th centuries, eventually being abandoned in the 17th century.  In the late 1200s or early 1300s, Kilbrannan Chapel (St Brendan’s Chapel) was constructed on the nearby shoreline.  There are a number of ancient burial slabs in the surrounding graveyard.  Moving further up the west coast of Scotland 25 miles north of Oban lies Castle Stalker.

Built around 1540 by Duncan Stewart of Appin, it was gifted by him to James IV for use as a hunting lodge.  In fact, its Gaelic name Caisteal Stalcair translates literally as ‘Castle of the Hunter’.  It sits at the mouth of Loch Laich (by Loch Linnhe) on a rocky islet known as the Rock of the Cormorants which is also the battle cry of the Stewarts of Appin.  In the film Monty Python and the Holy Grail, Castle Stalker appeared as Castle Aaaargh.  Now back south to two castles in England.  Firstly on the northeast coast in Northumberland, we visit the village of Bamburgh

Bamburgh Castle is probably the finest castle in England.  It is perched on a 180-foot high basalt outcrop of the Great Whin Sill on the very edge of the North Sea.  It commands stunning views of the Farne Islands, Holy Island and ‘land’ wards to the Cheviot hills.  Where the castle now stands, was the first fort of the Anglo-Saxons under King Ida in 540AD.  Their wooden longboats would have first come ashore here.  The entire kingdom of Northumbria spread from this point!  Finally, on this journey, we are on the English south coast at Corfe Castle in Dorset.

Corfe Castle is a village, civil parish and ruined castle.  The castle dates back to the 11th century and commands a gap in the Purbeck Hills on the route between Wareham and Swanage.  The oldest surviving structure on the castle site dates to the 11th century, although evidence exists of some form of stronghold predating the Norman Conquest.  Edward the Martyr was assassinated at the site on March 18, 978.

I hope you feel like myself that the castles bring a further interesting dimension to the landscapes that are already some of the most dramatic in the country.  If you have enjoyed looking at this aspect of the manmade landscape then take a look at my follow up post Britain’s Beautiful Castles Part 2