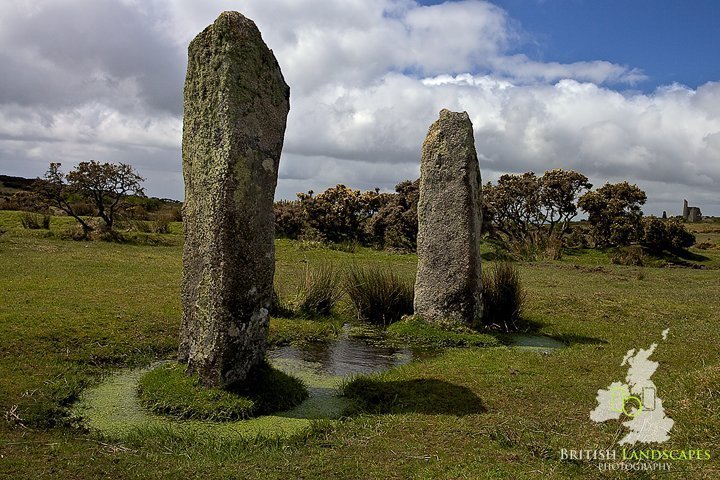 Britain is littered with the remains of past lives, civilisations and cultures, including standing stones many of which remain a source of mystery and conjecture with over 1000 examples still surviving to this day, including famous examples like Avebury, the Rollright Stones and Stonehenge.  When trying to decide on a subject for this article I was surprised to find that I had not previously covered these wonderful megalithic objects that bring a mysterious dimension to the landscape.  On this journey around a few of these stones, we will visit both England and Scotland including the Outer Hebrides where we make our first stop at one of the more well-known locations.

Situated near the village of Calanais, Isle of Lewis on a ridge of land above Loch Roag, Calanais is one of the more remote stone circles in the British Isles.  The circle consists of a central stone just under five metres in height, surrounded by a circle of thirteen stones.
Whilst on the Isle of Lewis we pop over the bridge to Great Bernera and the Cleitir standing stones.  Great Bernera is an island set between the sea lochs of East and West Loch Roag on the north-west coast of Lewis.  Until the 1950s, when Bernera was linked to the main island of Lewis by a bridge, which was the first pre-stressed concrete bridge in Europe, there was a small ferry boat.  Cattle were regularly swum across, the narrows.  The “Cleitir” (Gaelic for cliffs) standing stones now overlook the bridge.

Over on the Scottish mainland, we head South and take another ferry to the Isle of Arran.  On the west coast of the island lies a windswept and mystical peat bog called Machrie Moor.  Bronze Age stone circles and standing stones are strewn across its barren, undulating terrain.  One of the stone circles is known as Fingal’s Cauldron Seat, where sits a stone with a carved hole.  The legendary warrior giant Fingal is said to have tethered his favourite dog Bran to this stone.

Now a modern take on the stones with a visit to the North York Moors in England.  The Millennium Stone is just off the Ralph’s Cross – Rosedale Abbey road, a true modern megalith raised in the spirit of all the many prehistoric standing stones found across the North Yorkshire Moors.  The stonemason was Mike Weatherill of nearby Danby.

To finish this journey we head South to Cornwall.  The Pipers are a pair of standing stones near The Hurlers, located on Bodmin Moor.  They share the name with another pair of standing stones near the Merry Maidens to the south of the village of St Buryan, also in Cornwall.  The Pipers are approximately 2 metres high and the width between them is about the same distance.  They are situated about 120 metres west-south-west of the central Hurlers circle.  According to folklore, they represent musicians playing for three circles of dancers who were turned to stone for engaging in festivities on a holy day.

Having decided on this subject and then sorting through my portfolio for suitable images has made me realise that I haven’t visited as many of the 1000 or so locations that I thought I had.  Maybe that’s a project I should consider for the future.