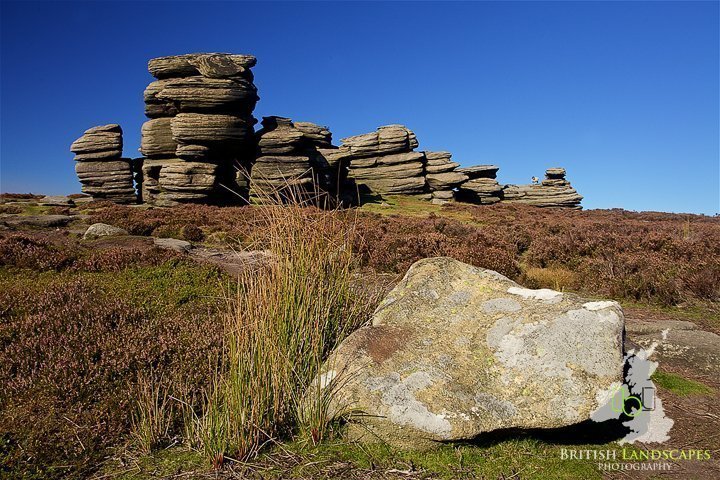 Bouldering is a form of rock climbing that is performed without the use of ropes or harnesses but in my case, it’s more about taking a walk with my camera to photograph the landscape on Derwent Edge.  Apologies to all the hardened climbers out there but I hope you are not too disappointed if you come across this post.

If you read my a Peak District – First Steps couple of years back you will know that whilst I live fairly close to the National Park it is one I have hardly photographed but I am hoping this latest visit will be the start of more frequent trips.

Derwent Edge has been on my list of locations to visit for some time and having made one aborted attempt due to mist and low cloud I finally got the opportunity a couple of weeks back.  I would have preferred to see some clouds in the sky but at least it was a beautiful day and I practically had the Edge to myself.

Starting from the Upper Derwent Visitor Centre at Fairholmes I crossed over the valley at Derwent Dam and made my way down the lane on the eastern side of the valley before turning to climb steeply before making my way to Whinstone Lee at the southern end of Derwent Edge.  From here there is an amazing view back down the valley to where I started from.

Now heading north I follow the Edge path which meanders it’s way past weathered rock formations.  Derwent Edge is an escarpment which forms the end of the high peat moorland plateau, the edges being the last remains of the gritstone which originally covered all of the Peak District, most of which was scraped off by the glaciers in the last ice age.

The first significant weathered rock formation I come across is Wheel Stones which sits high above Ladybower Reservoir.  The gritstone rocks have been shaped by the harsh wind and rain on the top of the Derwent Moors. The stones are also known as the Coach and Horses as they resemble a coach and horses on the horizon when viewed from the Snake Pass.

Further along and after doubling back on myself because I missed it I see the incredible looking Salt Cellar.  This fantastic piece of weather-sculpted stone stands proud and quite lonely and gets its name from its visual similarity with a salt cellar.  It is part of the long ridge of stone known by geologists as The Chatsworth Grit that runs down the east side of the Peak District.  Stanage Edge, Millstone Edge, and Curbar Edge are all the same type of stone.

Moving on, passing the Dove Stone and with the views starting to resemble a “lunar landscape” I eventually reached Cakes of Bread which are named unsurprisingly as that is exactly what they appear to be, bread cakes in Derbyshire terms.  As you approach it from afar, it is a smaller outcrop than the Wheel Stones, but it is far more striking, again formed by erosion. The locals have named these rocks and the names have stuck that well that they are actually shown on the Ordnance Survey maps.

Situated at the northern end of Derwent Edge, where it runs into Howden Moors is Back Tor, it’s the highest point at 1765 feet.  Back Tor has some very impressive jumbles of rocks.  It’s typically Dark Peak country; boggy moorland, pools, rocks and a great feeling of wilderness.

The views from Back Tor are quite unique, there aren’t many places in the Peak District where you can see so many of its highest features.  The Great Ridge, Derwent Valley Reservoirs, Stanage Edge, Bleaklow and Kinder Plateau can all be seen from this viewpoint.

From the wide-angle view of Back Tor, you would think the trig point was easily accessible but it isn’t the easiest  I’ve climbed to as it is sat on top of the gritstone rock formations so requires a bit of scrambling or to bring to some authenticity to the post title – bouldering!!!

Having completed my walk along the Edge I headed downhill across Green Stitches with only the sheep for company and enjoying the last rays of the day’s sunshine which were lighting up the surrounding hills and moorland across Howden Moors.

After a gradual drop over a couple of miles, a path is taken which drops steeply down through Hancock Woods to the edge of Derwent Reservoir from where it’s a short walk back past the Derwent Dam to where my walk began.