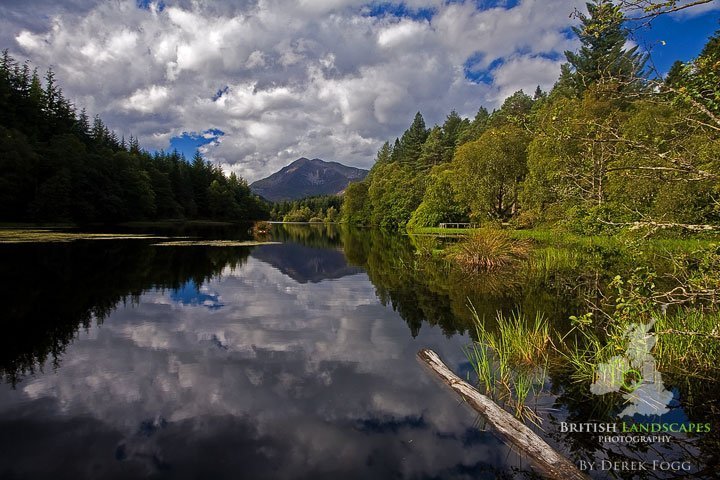 After the whistle-stop tours of the National Parks, Areas of Outstanding Natural Beauty and Heritage Coasts I thought we should just slow down a while so this time I am going to share with you some images of the inland waters – lakes, lochs and llyns we have in the British Isles. We will still travel around but hopefully, the views of the tranquil waters will help you relax and enjoy the journey.

Depending on where you are, England, Scotland or Wales these waters will have different names.  For instance, if you are in England they are generally referred to as lakes although I am going to contradict myself straight away.  The Lake District area contains some of the largest natural waters anywhere in England but only one of the lakes in the Lake District is called by that name, Bassenthwaite Lake.  All the others such as Windermere, Coniston, Ullswater and Buttermere are meres, tarns and waters, with mere being the least common and water being the most common. Only the English can make such simple things so complicated.

The image above of Loughrigg Tarn was captured on my photo trip in 2011 when the Lake District National Park was celebrating its 60th Anniversary.  Loughrigg Tarn was a favoured place of William Wordsworth, who, in his Epistle to Sir George Howland Beaumont Bart, likened it to “Diana’s Looking-glass…round clear and bright as heaven”, a reference to Lake Nemi, the mirror of Diana in Rome.

Scotland is a little more straightforward with most of the larger bodies of water being called lochs and the smaller one’s lochans.  There are more than 30,000 freshwater lochs in Scotland with many of the small lochs and lochans being in the western and northern Highlands.  The image below shows Glencoe Lochan a track of forest located just north of Glencoe village.  It was planted/transplanted from the Pacific Northwest of Canada in the nineteenth century by Donald Alexander Smith, 1st Baron Strathcona and Mount Royal.  After acquiring the Glencoe Estate in 1895, Donald Alexander Smith and his wife, Isabella Sophia Hardisty, moved from Canada to Scotland.  Soon after their arrival, Isabella became increasingly homesick for her ancestral lands in Canada.  In an attempt to abate his wife’s depression, Donald Alexander Smith had this forest painstakingly planted and granted it to her as a private refuge.

The five largest lochs in Scotland, Awe, Lomond, Morar, Ness and Shiel, hold about a third of all the water held in lochs in Scotland.   Although Loch Lomond has the largest surface area and Loch Morar the greatest depth, the largest loch by volumes is Loch Ness, which contains more water than all the lakes in England and Wales together.  Although not one of the larger lochs, Loch Tulla shown below is one of my favourites.  Lying between Bridge of Orchy and Kinghouse it is surrounded by remnants of the old Caledonian Forest.  A local roadside sign proclaims “That which burns never returns” Stances of Caledonian Pines have dwindled considerably over the years.

We now visit Wales where they are called llyns.  The vast majority of these are in the Snowdonia National Park where there are well over a hundred more than an acre in size, from Llyn Ogwen in the north to Tal y Llyn in the south.  The image below shows Tal y Llyn captured a few years ago in early Autumn and I don’t believe that I have seen a more symmetrical reflection since.  Llyn Mwyngil, to use its Welsh name is a large glacial finger lake at the foot of Cadair Idris with this view looking north-east up the Bwlch Llyn Bach pass.  The lake lies at one end of the Bala -Talyllyn Fault.  It is more commonly known as Tal-y-Llyn lake which translates to Lake in the Pleasant Retreat.  Three names !! Maybe the Welsh are trying to compete with the English.

The final location is a view that I had been trying to capture for some time until a couple of years ago an opportunity arose to do just that.  The view is Snowdon from Llyn Nantlle and was taken from a similar location to the painting of the same name produced by the famous artist Richard Wilson.  Created around 1766 using oil on canvas technique it is now located at the Walker Art Gallery in Liverpool. I hope my image does it justice.

So I am afraid that’s it for now and I hope you have enjoyed your visit to some of the many lakes, lochs and llyns here in the British Isles.  Don’t forget to join me next time for another look at the diverse British landscape.