Isle of Wight – Bays and Chines 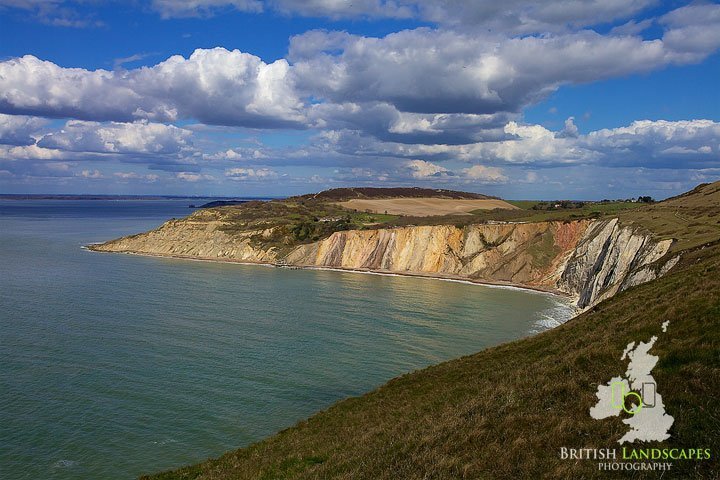 With weather conditions in the earlier part of the year being far from ideal for landscape photography, I have only just completed my first photo trip of the year.  I normally head south in the Spring to hopefully take advantage of the better weather conditions and visit locations out of the main holiday season.  The main location on my target list was the Isle of Wight and whilst in the area to make a brief visit to the New Forest with a view to a late Summer or Autumn return trip at some time in the future.
The Isle of Wight, England’s largest island with almost 60 miles of coastline is located in the English Channel and separated from the mainland by the Solent.  Slightly more than half of the island, mainly in the west, is designated as the Isle of Wight Area of Outstanding Natural Beauty which celebrates its 50th anniversary this year and one of the reasons for my visit.  The landscape of the AONB is diverse being made up of five different sub-areas which together consist of 11 distinct types of landscape.  This diversity is the special attraction of the island leading to its oft-quoted description of “England in Miniature”.  West Wight is predominantly rural, with dramatic coastlines dominated by the chalk downland ridge, running across the whole island and ending in the Needles stacks—perhaps the most photographed place on the Isle of Wight.
To reach The Needles I walked from Freshwater Bay over Tennyson Down.  Tennyson Down is a grassy, whale-backed ridge of chalk which rises to 482 ft above sea level and is one of the most significant downland sites in Britain.  Tennyson Down is named after the poet Lord Tennyson who lived at nearby Farringford House for nearly 40 years.  The poet used to walk on the down almost every day, saying that the air was worth ‘sixpence a pint’.  At the top of the Down stands a huge granite cross commemorating the life of Tennyson which can be just seen in the image below along with the windswept trees ably demonstrating just how exposed this location is.
Whilst at the Needles I took the opportunity to visit Alum Bay which is noted for its multi-coloured sand cliffs.  In the past, there were a number of independent huts selling the sand, but these have gone to be replaced by a large commercial enterprise which in my opinion as now over commercialised it, something I don’t support in such wonderful natural landscapes.  In a description from a Ward Lock guide from the 1920’s they were referred to as the “Coloured Cliffs” in which twelve distinct shades of colour had been counted including deep purplish red, dusky blue, bright ocherous yellow, grey nearly approaching white, and absolute black.
Having not visited the Isle of Wight since the mid 60’s one of the most noticeable changes in the landscape was the dramatic coastal erosion taking place around the island with one of the most affected areas being around Luccombe on the south-east coast.  At one end of the bay is Luccombe Chine a wooded coastal ravine, one of a number of such chines on the island, it leads from the clifftop to Luccombe Bay.  Access to the Chine is now only possible by walking along the beach from Shanklin as the timber staircase has been swept away by the landslips.  A small fishing community existed at the foot of the Chine until 1910, when the settlement was destroyed by a landslip.  Many Islanders use Luccombe Chine and the surrounding cliffs as a place to gather thoughts and de-stress.
I also visited Compton Bay, located on the southwest coast.  The northern edge of the bay is defined by a distinctive white chalk cliff called Freshwater Cliff, named after Freshwater Bay which is located next to them and forms a small but piercing bay into them.  The eastern edge of the bay is formed from soft red and orange cretaceous rocks that are rapidly eroding.  The bay is popular with wave and kite surfers due to the reliable and consistent waves that form when the prevailing south-westerly wind is blowing onshore.  There are dinosaur footprints visible in Compton Bay when the tide is low.
Other images from my visit to the island can be seen in the gallery and I will shortly post some details of my preliminary trip to the New Forest along with images captured whilst there.